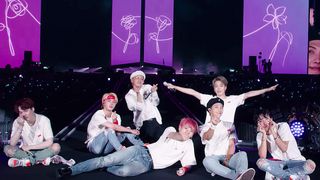 BTS has released the first trailer for Bring the Soul: The Movie. The concert film follows Jimin, Jin, J-Hope, Jungkook, V, RM and Suga on the European leg of their “Love Yourself” world tour.

Bring the Soul, directed by Park Jun Soon, is the K-Pop supergroup’s third theatrical release. It offers fans an intimate look behind-the-scenes, inside dance rehearsals, and features footage with fans as well as between the members themselves. Beginning on the day after the final concert of their Europe tour, the film kicks off on a rooftop in Paris. BTS takes fans behind the spotlight as they visit new cities to perform in front of crowds of thousands across the globe.

A medley of intimate fan moments, stadium performances and gruelling rehearsals, Bring the Soul: The Movie is slated to hit theatres globally August 7.

You can watch the trailer above and grab tickets now by heading over to bringthesoulthemovie.com.

Isabelle is an Australian writer based in Berlin.

Work From Home
11 Documentaries on Netflix That Could Change Your Life
LifesponsoredMarch 24, 2020

Work From Home
10 Skincare Products to Try While You’re Stuck at Home
LifesponsoredMarch 26, 2020

J-Horror Classic ‘Ring’ Gets an Internet-Era Update in Terrifying Trailer for ‘Sadako’
MoviessponsoredJuly 12, 2019